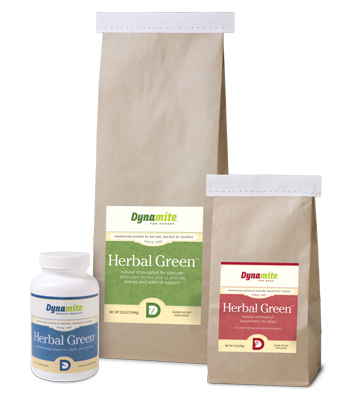 More than 13 percent of Americans have kidney disease, according to the National Kidney Foundation. That number does not include all the people with weak, malfunctioning or low-functioning kidneys. Though there are no officially tracked percentages of pets that suffer from kidney disease, we know it is a health issue for them, too. Most animals are at least ten years old when they encounter renal failure; but despite this senior age, renal failure is preventable in many situations.

Kidneys have a vital job. They are the body’s “garbage collector.” They filter toxins from the body’s blood supply, to ensure the other organs receive the cleanest blood and work at their optimum levels.

Some symptoms of kidney problems in both humans and animals can include:
· Changes in urination habits
· Swelling
· Fatigue/lethargy
· Nausea and vomiting
· Feeling cold
· And many more

Dr. Regan Golob, Dynamite Gold Director, suggests Dynamite Herbal Green™ to help increase the amount of chlorophyll in the body. Chlorophyll is a natural antibacterial and anti-inflammatory. In many cultures, it is used to relieve gas and bloating and promote wound healing, thus reducing risk for kidney stones and gravel, and helps increase the overall health of the kidney.

Along with being a rich source of chlorophyll, Herbal Green contains high amounts of Alfalfa, which is rich in vitamins, minerals and other nutrients that play a vital role in the strength and growth of our bones and in the maintenance of a healthy body. It contains protein and vitamin A, vitamin B1, vitamin B6, vitamin C, vitamin E, and vitamin K. It also contains calcium, potassium, iron, and zinc, which are minerals suggested to help break down kidney stones and help cleanse the kidney. Among being one of the most nutrient-rich plants available, it is a natural diuretic; excellent for kidney health.

“In order for humans to remain healthy, eat 75 percent alkalizing foods such as fresh fruits and vegetables and only small amounts of acid producing foods such as meats, dairy products and most grains. If we fail to do this, then the body will remove the alkali minerals (primarily calcium), from the bone to neutralize these acids, the result being degenerative disease. While we know this to be the truth, it is sometimes difficult to maintain this type of diet when we are traveling or during the winter season in some locations. This is one reason Dynamite offers Herbal Green for Humans,” said Jim Zamzow, Dynamite founder and president.

Dynamite Herbal Green for horses, dogs and humans is made entirely of the highest quality ingredients grown. Each plant is juiced and spray dried instead of cooking, which allows for the highest possible nutrient content to stay intact.

In addition to Herbal Green, electrolytes can help support a healthy kidney. For baseline electrolyte maintenance, we recommend the Foundation Program for each species. During times of stress, exercise and heat, increase electrolytes using Dyna-Spark for Horses or Dyna-Spark for Dogs, respectively, and Elixir™ for humans.

Most people are used to the adage that they should be drinking eight glasses of water each day. Golob suggests that this amount is too high if proper amounts of electrolytes are not consumed, and can cause serious electrolyte deficiencies, making the kidneys work too hard. “Too much water without the needed electrolytes can cause the body to send improper nerve signals,” Golob said.

“If you are eating the right foods, you should not actually need eight glasses of water daily. Too much water flushes electrolytes, and leaves the body unable to flush out toxins,” Golob said.