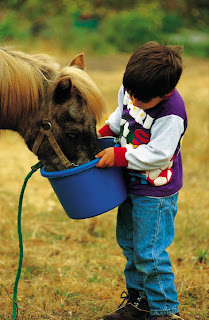 Water is a huge part of your horse’s nutrient profile. Weighing about nine pounds per gallon, it actually makes up the bulk of the “ration”. Consider that most horses will drink an average of 10 gallons per day, which equates to nearly 90 pounds of consumption. If forage sources and supplements are optimal, and the horse still is “ADR” (ain’t doin’ right!), look at water.

Providing chlorinated city water is one of the most common boo boo’s, yet we don’t often have a choice. Either we are on a municipal well or at events where chlorinated water is the only option. Besides tasting awful, which keeps many horses from drinking adequately, chlorinated water can suppress thyroid function and suppress beneficial gut bacteria as well. Chlorine is put in a swimming pool to kill bacteria, after all. One option is to let the chlorine “gas off” by filling a muck bucket or other larger container and letting it sit for 24 hours, then filling the usual water tub or buckets from that, after the chlorine has evaporated. If forced to use city water for a time at events, you might also consider adding just a touch of Super ACV or even some apple juice to the water, to help disguise the taste. Doing this for a few days at home before traveling can be a great idea, so they become accustomed to the taste.

Streams and other run-off water can be very hazardous. A few years ago, one distributor had several mares abort in late-term pregnancy after flooding caused a creek to over-run their pasture. The creek contained run-off from wheat land and other crop land which had recently been fertilized heavily with nitrogen fertilizers. She moved the remainder of the mares, and all was fine. Never let horses drink irrigation water, as that can be very heavily contaminated with herbicides, pesticides and fertilizers. Excess nitrogen in water will suppress oxygen in the system, as well as damage kidneys. Even at lower levels, it will suppress vitamin A which can lead to a yucky coat, and may also cause wacky behavior due to low oxygenation of the brain. Many of these compounds are endocrine disrupters as well, which can lead to metabolic issues and even founder.

If you have your own well, you still may not be in the clear. Groundwater through most of the U.S. is severely contaminated with nitrogen fertilizers and other chemicals, especially in farming areas. Lead and other heavy metals may also be either naturally-occurring or the result of leaching from industrial and mining sites, which can be hundreds of miles away via underground rivers and aquifers. Expensive though they may be, if a water test indicates dangerous levels of chemicals and metals, a filter may well protect your health and investment in your animals. Some people put a handful of Miracle Clay in the tank, stir the water up well, and let the clay settle to the bottom of the tank before allowing the horses to drink. The Miracle Clay has a strong negative charge, and will glom onto chemicals and toxins which are usually positively charged, and tie them up. Be sure to clean out the tank when it gets low, so they don’t drink the clay residue in the bottom. Be aware that garden hoses may contain high levels of lead and other metals, as well as chemicals, which may leach into the water especially if the hose is out in the sun. At the very least, let the water run for a few minutes to clear out the hose before watering the horses. Hoses from RV supply houses may be a better choice.

Never feed horses softened water. One distributor years ago had a mare who kept eating dirt, no matter what minerals we provided. She would literally leave feed to go out and dig holes, eating so much dirt that she had endured several surgeries to “clean her out.”  When we asked about the water source, the owner assured us that it was fine, “I have a water softener in the barn.” Yikes. We had her unhook that, and the mare quit the dirt eating.

Don’t use the black rubber tubs or buckets made from recycled tires. Besides tasting icky, the water will pick up the ethoxyquin and heavy metals from the tire parts. At one show I attended with friends, a gelding colicked during a workout and proved to be quite dehydrated. They were watering in their “show buckets” that were black rubber, and the water at the fairgrounds was chlorinated, as well. I had them swap out the hard plastic feed buckets and put the water in those, and use the rubber ones just for the grain, and they went back to drinking more normally.

At home, the type of tub is critical, too. Many of the rubber and plastic tubs contain chemicals which are endocrine disrupters, and often the galvanized tubs are a better choice for pasture tanks. Especially if you are seeing metabolic issues, try switching away from rubber or plastic. Optimally, automatic waterers with stainless steel bowls are likely the best choice. It goes without saying that all water containers should be scrupulously clean, and the water of drinkable temperature: Cool in summer, and without chunks of ice in winter. Some horses “backwash” and like to gargle with water as they eat their hay. They may require either a separate tub to splash around in, and a real water container to drink from…as does one of mine. Even the color of the tub or bucket can affect their drinking choice; color has a vibration, and will affect the water energetically. Observe the obvious, and perhaps try a different color. Even the location of the water in the stall or turnout may affect how they drink. A little splash of Super ACV in the larger tubs and tanks will help keep algae down in the summer, though this is best done in plastic or rubber tanks, as the acid may leach metals from the galvanized tanks into the water.

Consider that mineral content of the water may be affecting your horses. High iron in the water, for example, can suppress copper in particular. The high iron water and soil in much of the eastern part of the country, and the southeast especially, requires that extra copper be supplemented to the horses there; adding SOD for Horses occasionally works great. If you are seeing “fish-hook” hair, bleaching of coat color especially in dark horses, or parasite issues, suspect that you may need supplemental copper due to the high iron.  In the west, the water can be very “hard” and high in alkali minerals like magnesium or calcium, requiring that the horses have access to extra phosphorus. For all horses, supplementing with the Free Choice Minerals regimen (1 to 1, 2 to 1, Izmine™ and NTM Salt™) in addition to the basic daily supplement, will allow them to seek out what they need to balance their system.

Bottom line is, listen to your horse. Water quality is a huge issue in horse management.  Remember that water carries a vibration. There are energetic ways to affect it through systems with magnets or other energy sources, and even your own blessing of the water can go a long way toward cleaning it up in all ways.