Dynamite powered little Aussie, Zia, is a 2 ½ year old Australian Shepherd that I purchased at 8 weeks old from a local friend as my next competition prospect. She is my 8th Aussie, all of whom have been fed Dynamite products since 1991.

Zia’s parents are both Champion working stockdogs; giving her the best chance to inherit the instinct, bidability and natural talent to control livestock as a working partner for me.
Wow, was I in for a treat with this little dog! 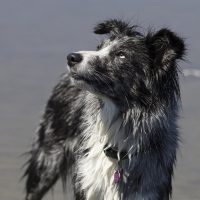 She started competing in the fall of 2016 in farm trials which test the team’s ability to do farm work such as gathering in big fields, sorting at a gate, working in alley ways and small pens. Precision is not as important as how quietly and carefully the stock is handled, and getting the tasks completed. 2017 began our competition in the Started level arena trials of ASCA (Australian Shepherd Club of America) which is the largest single breed club and registry outside of AKC. (see ASCA.org) Competition is with cattle, sheep and ducks, moving them through various obstacles in an arena. In the Started level, Zia won: Most Promising Started Aussie (highest single score in the trial) twice High Combined Started Aussie (highest combined score in trial) 3 times High Combined non-Champion (includes all entries in Open and Advanced classes) High score Cattle – over all levels, she had the highest single score! Our goal for the year was to compete at Nationals in the Started division.

ASCA Nationals happens once a year, at a different location in the USA. There are many competitors from Canada and from Europe too! This year, Nationals was held in Bryan, TX and had a total of 1,070 dogs entered in 3,717 event runs. (stockdog, conformation, obedience, rally, agility, tracking and dock diving).

We entered the pre-Nationals stockdog trial, held in conjunction with Nationals, and Zia won the Started division in Cattle! There were 17 dogs entered in her class, which is more than the total entry of a normal competition back home. She did well in all her other runs, but winning that cattle class was a big honor and thrill for me! 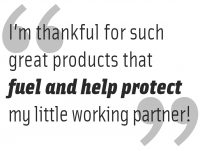 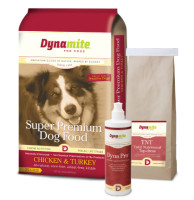 Zia weighs only 28 lbs and it amazes me that 500-1000 lb cattle will do her bidding! She is exceptionally fast and requires careful attention to her diet for all those calories burned. She is fed a combination of Super Premium Dog Food and raw food, (mostly lamb from our farm). She also gets either Showdown or Canine TNT, DynaPro, Canine cookies and fish oil. She has had a few minor injuries which needed Solace and Wound Balm. I’m thankful for such great products that fuel and help protect my little working partner!

In a few years I hope to have her qualified and competing in the ASCA stockdog finals, the top 30 Aussies in the world. There are a lot of training miles to go to reach that goal.