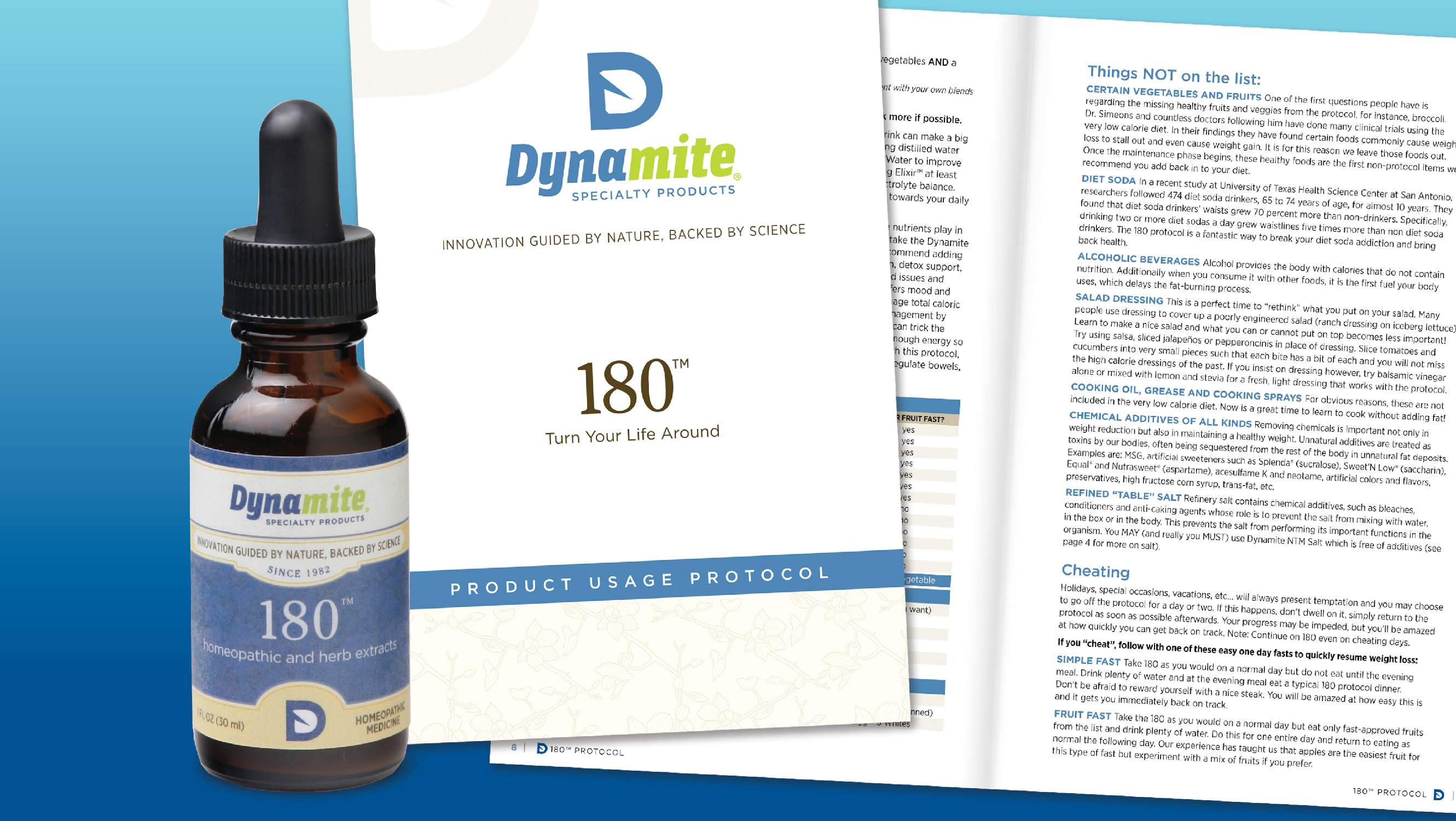 Dynamite 180 is a homeopathic remedy to help break the body’s addiction to carbohydrates and sugars, simultaneously helping the body shed excess body fat. Through the process, the brain learns to read hunger, digest food more proficiently, and burn its fat stores.

While taking 180, individuals are asked to follow a particular food protocol, consisting of particular fruits, vegetables, and protein. This protocol helps the individual learn to feed itself properly and regain a healthy lifestyle.

180 makes the abnormal fat reserves of the body available to be burned as fuel. With the introduction of 180, thousands of extra calories begin to flood the system from the abnormal fat being metabolized.

It is commonly known that there are three different kinds of fat in the human body:
Structural (visceral) Fat found in and around the muscles, cushioning organs, padding of bottom of feet, etc.
Normal (dermal) Fat is found directly under the skin’s surface and provides the soft cushioning between the skin and frame of the body.
Abnormal (adipose) Fat found under the dermal fat and not available for use by metabolism until the other two kinds of fat are used.

When using 180, along with the structured meal plan, the body is able to burn abnormal fat, resulting in weight loss.Most calorie reduction plans will not produce the best results for those individuals with an abundance of abnormal fat stores, because their bodies will begin burning the wrong kind of fat. When a low calorie diet is introduced in the system, the normal reserves of fat are used up first. As a result, most people look gaunt and drawn after a reduced calorie diet. When the normal reserves of fat have been reduced, however, the abnormal fat remains intact. Without using 180 in a reduced calorie diet plan, the body will burn its needed structural and normal fat.

180 works to release the abnormal fat stores and make them available to be used as fuel. By following the protocol precisely, the body will “burn” the abnormal fat while preserving muscle, normal fat, and structural fat.

180 will help to release the abnormal fat reserves in the body, but commitment is what keeps the extra weight off. Commitment to all phases of this plan will retrain the hypothalamus to be the food/fat gatekeeper it is meant to be and help break the addiction to refined carbohydrates, sugars, and other problem-causing foods.

The hypothalamus is located just above the brain stem. It is known as the master gland and is the supervising center in the brain that links the body’s two control systems; the nervous system and the endocrine system. 180 helps remind the hypothalamus to crave healthy foods, and to spurn carbohydrates and refined sugars.

After completing 180, the hypothalamus no longer craves unhealthy foods, allowing the user to stabilize their weight and redevelop their lifestyle. The user can then slowly add in small amounts of carbohydrates and sugars if he desires, but the cycle of addiction is now broken!

What makes 180 so different?

180 contains a wide array of herbs and roots to aid the body as a whole.

Larch Flower Essence has shown to give a person a feeling of greater potential, confidence and a release from self-limiting behavior and beliefs.

Eleuthero Root to assist in reducing inflammation and support the liver as it eliminates toxins.

Red Clover Herb is used for conditions related to the heart, lungs, liver and blood.

Guggal Gum to aid the thyroid in overall function, and with respect to metabolism. In Eastern medicine, its uses consist of aiding in cleansing blood vessels, inflammation, obesity, easing joint pain, thyroid problems and digestive disorders.

L-Carnitine helps reduce oxidative stress and is a nutrient that helps the body turn fat into energy.

Dandelion Root assists in the detoxification of the liver and gall bladder as they manage the flushing of fat reserves.
Turn your life around with 180!