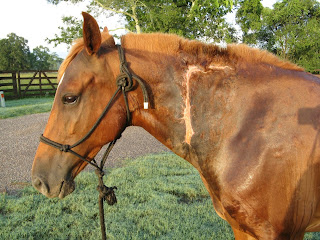 Other pictures below. WARNING: Pictures are EXTREMELY graphic.

In May of last year I decided to breed one of my Dynamite mares, Giddy. I put her in the pasture with my stallion plus an outside mare to be bred. After I put her in the pasture with them, I watched for a while and felt comfortable enough to leave them together. An hour later, I found Giddy standing alone with her head down and many bite injuries and wounds along with a tremendous hematoma on her neck. From the looks of things, Giddy had run from the stallion and got chased down through woods and then into a fence post. The main injury on Giddy was a hematoma on the left side of her neck the size of a football. I ran cold water over it and applied Miracle Clay to draw out the toxins. As for her supplements, I added Hiscorbadyne in therapeutic levels, and extra Dyna Pro to her TNT, and Breeder Pack. A couple of days later, the hematoma was leaking somewhat, but, not the way I would have liked.

On the fifth day after the accident, she was still feeling poorly and appeared to be worse. The weather was warm and the flies started dive bombing her wound. I sprayed Dyna-Shield around and on her wound. I had noticed maggots started to appear, and read on Dynamite Online that maggots can help keep a wound clean. Therefore, I tried removing some of them, but did not worry about getting all of them. I even utilized some of the new fly product which was being tested by Dynamite. It was a white powder, and when applied, she looked awful, but I was determined to get rid of the flies.

On Saturday afternoon, five days after treating her, she acted as if she was feeling worse, and was beginning to smell bad. Her temperature concerned me also. It started at 102 degrees and 2 hours later it had increased to 103.5 degrees. Because her temperature was rising, I decided to call the local vet in case of infection in hopes of getting some antibiotics. I wanted to act responsible in a situation that seemed to me to be turning into more of a crisis. When the vet arrived he looked at me and told me to wash everything off that I had applied. Next, he proceeded to cut a huge amount of skin from her neck telling me that he was trying to prevent infection. Then he sprayed her neck forcefully with hose water making it bleed while explaining to me that I would need to do what he was doing 3 times per day. It was hard to watch this aggressive form of treatment, but I held my tongue.

After the vet had finished, he firmly told me that I would need him to come out once a week to check on Giddy, to prevent infection. Apparently, he was very busy that day, so he gave me instructions to finish up and shave all of the hair around every small and large wound she had. The vet put Giddy on antibiotics, and gave me an aerosol worm remover for the maggots. He instructed me to spray the area hard enough with the hose to make her bleed three times per day so she would heal properly. He also told me I would have to go to a research veterinary school in the near future to do a skin graft, but his main concern was to keep her from getting infected now. Another thing he advised was that I take Giddy off of Hiscorbadyne, which I did not do. Giddy seemed to be doing better and the bad smell was gone five days later, so I discontinued the additional month’s worth of antibiotics the vet recommended. I was confident that keeping Giddy on Dynamite and prayer was all I needed. I never used the aerosol product for the maggots. Also, I never asked the vet to come back because I was uncomfortable with his radical treatment of her wound. Over the next two months, I would gently rinse Giddy’s wound twice a day, and then would gently spray on a mixture of distilled water, Solace, and Trace Minerals Concentrate. Then I would put Wound Balm around the outer edges and Wound Salve on the open area, and spray on Dyna-Shield. The flies and maggots disappeared the next week, so I knew she was healing well. When the wound started to close more in the next month, I started applying Tea Tree Oil mixed with olive oil to the wound, and smeared Wound Balm all around it twice a day. Over the next two months, I noticed she was healing very fast! Interestingly enough, the wound healed so well and quickly that my husband’s client who is a surgical M.D., and saw the before pictures, commented that I should become a veterinary wound specialist. Another vet who saw Giddy during the healing process asked what had happened to her. When I told her, she told me she thought my horse looked really good and to keep doing whatever it was I was doing to help her.