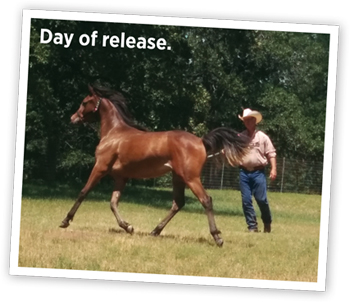 WARNING: There are images of Flame’s wound at the end of this story that are quite graphic.

Our 1-year-old filly, Flame, injured herself on a metal fencepost. Her injuries consisted of a significant tear on her chest and a deep puncture wound. I called a vet immediately. Before he arrived I also called my trainer’s Dynamite upline who has been very successful in helping horses recover from serious traumas. She has used Dynamite products for many years and has had many miraculous testimonies!

My husband and I both put lavender oil on our hands to help calm both us and Flame down. My husband then entered the paddock and worked with Flame to catch her and get her halter on. Using her instructions I went straight to work on Flame putting lavender on the tips of her ears to calm her down. I got 20cc of Dyna Spark and Dyna Pro in her using an open-ended syringe. I did not have a bottle of Trace Minerals Concentrate on hand otherwise I would have applied that as well. I sprayed Release on the area to try and help her calm down and then sprayed her with Dyna Shield to get all the flies off her legs. I got several pills of Apis and Arnica montana (homeopathies) and put them directly into her bottom lip. I would have given her Staphysagria and Hypericum also but I didn’t have them on hand. The vet arrived just as I was administering the homeopathies. He sedated Flame and then moved her to the barn where [we could access] electricity and water. He shaved around the wound, cleaned it and started stitching the entire area. He also put in a drain since the puncture wound was a very deep, open pocket. His remark was “I give those stitches seven days, before that I [wouldn’t] get excited about anything. We’ll see how they do by day seven. We have a lot of obstacles to overcome before then. She needs to be stall bound at least a month and we will know more when I come back in a few days to check on it.” He gave her a strong antibiotic shot and a tetanus shot. When he was done I sprayed more Release on the wound and also put Wound Salve all over it. He also gave us a tube of Bute and told me to give her 10cc a day. I knew I had my Arnica montana, but I allowed him to leave it anyway. Praise God the place where she is has a foaling stall. That became her new “home”.

We continued giving Dyna Pro morning and night and Dyna Spark every night. The lady who was keeping my filly commented that she was drinking copious amounts of water. I thought to myself “that is a good thing; it is helping her body flush out any toxins and keeping the wound well hydrated to heal faster”. I also used homeopathies (Arnica montana, Apis, Hypericum, and Staphysagriaon) a daily basis with her feed. I gave her about 7 of the “pills” per day for several days with her feed.

On the fourth day after the injury another vet came out to look at her and see how she was progressing (the first vet had jury duty). The lady who was keeping Flame was there as well as her daughter. They were both listening to the vet and watching him work. He saw pus and pockets of air where the stitches were and he was not happy with that. He removed the drain because he said it was no longer needed. He also thought it tore off and that he didn’t quite get it all to which he didn’t really say anything else. I stood back in shock. He cleaned the stitches of the wound and then got ready to give her another round of antibiotic. However, she lunged forward due to the needle and smashed the injured area right onto the stocks. All the stitches burst wide open and the wound was once again exposed and very ugly. The vet just stood there and said, “Well, that’s not good.” “Oh my Lord!” I thought in silent shock as I stood there in complete horror at what had just took place. His suggestion was to just hydro the wound and continue to keep her stall bound, other than that there wasn’t much else that could be done. He thought she might be stall bound for a few more months while she fully recoveredand said he would come out in a week to check on the progress. The wound was gaping open, white with flesh, and red with blood spots on it, and he just left and drove away. I was horrified. After he left we all remembered that Flame’s leg was very swollen and we were going to ask him about it, but we all forgot about it because we just wanted him to LEAVE!

Then, my trainer’s Dynamite upline arrived. She was the much needed hope in what had just been a horrifying experience. She got to work right away and started by spraying Release on both sides of her chest and clearing the K26 point. Next, Solace was applied externally to clean the wound and then administered internally to Flame as well. After that Trace Minerals Concentrate was applied on the open flesh until the bleeding stopped. Then she put Balm on her hands first to warm it up, then began rubbing and working it in all around the area (but not in the wound), all down the leg and on the inside of the leg where drainage had dripped aggravating it, and finally on the knee since it was so badly swollen. Lastly, Wound Salve was packed into and on top of the open part of the wound. She then finished by massaging Flame (she is a licensed massage therapist). My filly looked astronomically better after treatment and I felt much better too! Flame was calm, quiet, and the wound itself was now a nice brown color instead of just white flesh. You actually could not see the “flesh” itself, but rather you saw the Wound Salve. I and the other ladies there were simply amazed and in awe. We followed the same protocol almost every day after that. We did hydro it some days to get “gunk” off of it, but the Dynamite products would then be applied following the same protocol. By the very next day the swelling in that one leg was greatly reduced and by the second day it was gone—it was wonderful! It may seem odd to some, but I changed my anger from the busted stitches incident into praise because now the wound was free to heal from the inside out like it needed. 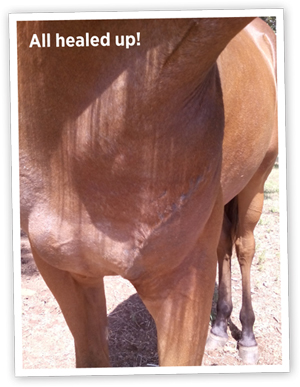 The vet returned one last time about 12 days after the injury to see how the wound was progressing. He ended up taking out the remaining stitches and trimmed off a little bit of dead flesh. I told him that I felt the wound would have to heal from the inside out and I believed the Dynamite products were helping the wound heal wonderfully. He confirmed that the wound would have to heal from the inside out, layer by layer, but made no comment or ask about the products I was using. I also told him specifically about how the Balm had helped reduce the swelling so quickly, but he did not acknowledge me. That was the saddest thing. Something worked and helped my horse and might help others, but he did not listen to me nor did he seem to care. He gave another antibiotic shot since the wound was still open and commented that he wanted to see a little more growth where the puncture part of the wound was, but not too much growth, and to call him if proud flesh started to appear, otherwise, he was very pleased with the progress. The day the stitches were removed, I used a Q1000 laser on the wound twice (I had used it once before as well) and 2-3 more times throughout the healing process. I didn’t use it more often because the wound looked so great.

The trainer, who had been helping care for Flame, commented that the wound looked better and better every day. The lady where she is boarded who saw her multiple times a day commented, “Every time I come down to see her that wound looks so much better, and just in a matter of hours!” Every single day we were in absolute amazement as we saw the flesh, hair, and everything needed grow right back the way it should. The wound is healing up beautifully and we continue to put Balm on her chest every few days to prevent any scarring. Thank you Dynamite for making such great products. You have made a positive and miraculous impact on Flame’s life! 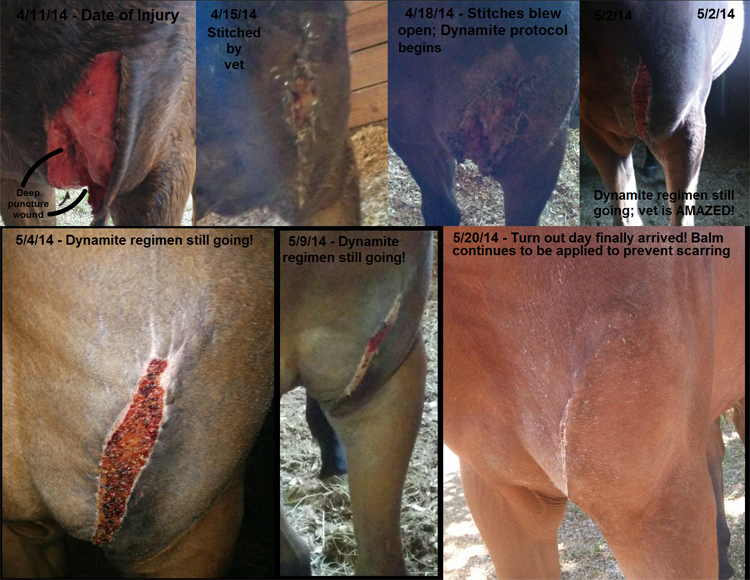 BACK TO EQUINE TESTIMONIALS