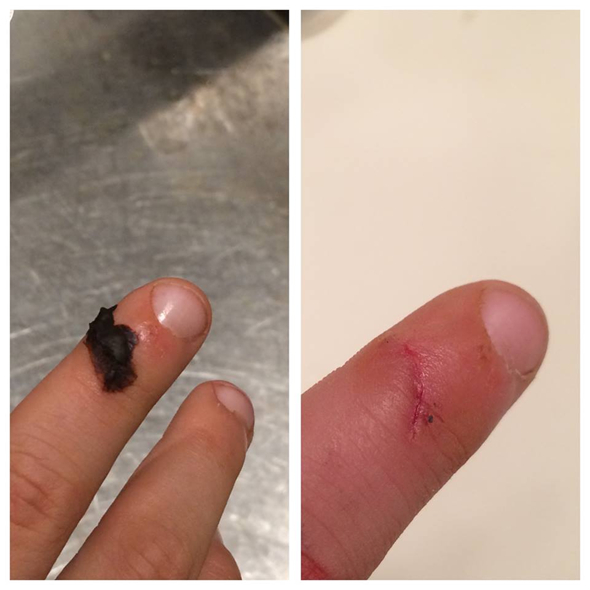 Last night I was summoned downstairs to a request for help from my 10 year old son, Lane. When I didn’t respond immediately there was a more urgent request. As I got downstairs I followed the trail of blood all over the kitchen, the counter, the sink, the knife, and the bottle of Trace Mineral Concentrate. By that point, Lane was running water over his finger in the sink. He had tried to open the bottle of TMC but wasn’t able to get it open while trying to manage the bleeding of his finger that was cut. The picture on the left is once it had clotted and the TMC. The pic on the right is less than 24 hours later, well on its way to healing. When he saw how good it looked the next day, he asked if he was going to have a scar. I said probably not with using the TMC right away and Wound Salve as it heals. I think he was a little disappointed. 🙂

I keep Trace Mineral Concentrate in the kitchen, bathroom, first aid kit, the barn, and my purse. It has a million uses and is often times our first line of defense. Thank you, Dynamite Specialty Products, for one of many items I prefer not to have to be without. ? Lane had been working on a great stick with his new pocket knife. It slipped and cut his finger. After it was all taken care of, he said, ” Thanks for not being mad.” I replied, “The only way to learn the feel of using a knife, is by using it.” His reply, “And it’s the only way to learn the consequences. ” Indeed.